This screenshot demotivational poster is highly, utterly, indubitably, and absolutely Anti-Miroku. Sit back, relax, and enjoy the destruction of Miroku’s deceit as well as his opportunistic heart capable of lying, cheating, manipulating, and deceiving anybody and everybody around him.

To say that Miroku is an altruistic person has got to be the lamest joke I have ever heard in my entire life. Every time this lowlife enters the screen spewing all those sweet nothings and acting all valiant, especially towards Koharu and many other girls and women he intended to bang and screw, I just want to scream at him for being one of the most two-faced liars in the entire world. I understand the curse he and his family endured, but that does not excuse him for his rubbish behavior let alone his hypocrisy most specifically towards Inuyasha as well as Sango to a certain extent. At least where Sango is concerned, he and she can be hypocritical together. Nevertheless, where Miroku is concerned, he will never have my sympathy and will end up having my rage.

As I said many times before, I desperately tried to like him. His Wind Tunnel was cursed yet cool. He was relatively capable with a staff when he is not hitting Inuyasha on the head with it. He also had interesting sutras for exorcisms. However, in the grand scheme of things, he was not a particularly strong fighter let alone the definition of an Alpha Male. No. To me, Miroku is nothing more than a hypocritical loser who talks the big talk but fails to walk the walk as a genuine friend/surrogate brother to Inuyasha as well as a combatant. For somebody who constantly chases skirts and wants to have sex with women, he thinks he is above Inuyasha when it comes to how he treats them. Here is a dose of reality about Miroku. He cannot treat women decently for crap, so he has no right to lecture Inuyasha about how he should choose between Kikyou or Kagome. Furthermore, for someone like Miroku who has a potent yet cursed power like the Wind Tunnel and his skills with a fighting staff and sutras, it is sad to know that Inuyasha always has to do the work to save Miroku’s pathetic behind.

Miroku’s hypocritical scumbag ways do not end with his borderline uselessness, fake brotherhood with Inuyasha, a grand body of lies, and incessant womanizing. That is because he is also a credit-hogging bastard as well as a loser devoid of any decent compassion. In the Panther Devas saga, Sesshoumaru and Inuyasha were the ones who defeated the Panther King with their swords Tenseiga and Tessaiga. However, Miroku, Sango, and Kagome who only got the villagers to safety from being sacrificed were hailed as the heroes. Something does not add up in this formula. Moreover, I find it hilarious that some villagers would perceive Miroku as a strong fighter when he is a cowardly wimp, a credit-hogging sleazeball, a physical bully towards Inuyasha just because he is not as powerful as he is, and an opportunistic scumbag who uses his sob story to go under women’s skirts regardless of their age. He also has the dishonor of being one of Kagome’s followers alongside Sango and Shippou, thus making him just as brainless and just as unemphatic towards Inuyasha’s problems and joys. Say it with me, now, Miroku is nothing more than a big excuse for a loser, credit-grabber, phony, and total dickhead!

Speaking of dickhead, I would want nothing more for this charmless hypocrite to be hung and castrated by The Phantom of the Opera himself, thus making his limp corpse a fine addition to his collection of life-like statues. Another suitable punishment for this vile pervert is for him to be maimed and quartered by the Psycho Rangers, for they can use his entrails and guts as sacrificial offerings to Lord Zedd and Master Org. If I want to take things further with Miroku’s punishment, I would gladly have him stabbed ten thousand times with a chef’s knife, douse his corpse with kerosene and cyanide, light a match, and watch his carcass burn to ashes. That would be my idea of great punishment for this loser. I am not sorry that I am giving this pathetic pervert and horrible excuse of a comrade the capital punishment he deserves for being a hypocrite and for being one of Kagome’s lame satellites.

I hope you all enjoyed this, and I will see you in the next submission. Take care, stay safe, and never be like Miroku who is such a vile hypocrite, everybody.

The Hypocritical, Deceitful, and Credit-Hogging Shyster from Inuyasha belongs to Rumiko Takahashi and Sunrise. 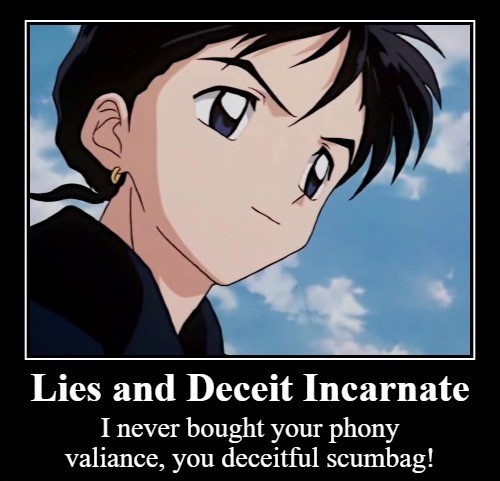