This screenshot motivational poster is highly Pro-Jeff McCallister and Pro-Edmund Pevensie but it has nothing to do with shipping whatsoever. However, this has something to do with my own perception of how I wanted to see myself in these characters when I was a lot younger. Furthermore, this is my contribution for this year’s Red Ribbon Reviewers’ Month.

My dear friends, I would like you to immerse yourselves to when I was a 13-year-old seventh-grader who was a hardcore Home Alone and Chronicles of Narnia: The Lion, The Witch, and The Wardrobe fan, considering that the former film has celebrated its 30th anniversary and the latter film is going to celebrate its 15th anniversary. Picture yourselves in my position when I religiously tuned in to see these young men respectively played by Michael Maronna and Skandar Keynes gracing the screen with their rambunctious attitudes, ambivalent moral alignments though still leaning on the side of good, yet likable charms. Do you know what sparked in my mind back when I was an impressionable 13-year-old boy? That’s right, ladies and gentlemen. I wanted to be thin like them.

I know that what I am about to say is going to be quite triggering. However, you need to understand that I am not going to trigger, let alone implicate, some type of eating disorder to be passed down on you. Granted, as I am talking to you in my present adult self, I am currently 12 stone 12.13 lbs (180.13 lbs or 81.7 kg), but the truth remains that I still have about 1 stone 9.13 lbs to 3 stone 12.13 lbs to go until I reach my healthy weight range. Going back to the time when I was thirteen years old, I may have been a bit lighter than I was in comparison to today, but I was still very unhappy with what I looked like and I almost started to become very wary of the types of foods I was eating at that young of an age, i.e. being super aware of the calorie content of certain meals my relatives in San Francisco were preparing during the arrival of my dad, my mom, myself, my younger sister, and my younger brother as well as the many times my family and I would go out to restaurants or do food shopping. There were times I thought to myself that having something to eat that did not meet the rules I had to be thinner was akin to committing appearance suicide just because I wanted to know what it was going to be like to end up skinny.

Enter Jeff and Edmund who I not only identified with in terms of their ambiguous personalities and even the dumb decisions they have made when I was their age, but also the actors who portrayed them who were a lot slimmer than I was when I was thirteen. It even got to the point where one of my biggest performing arts dreams when I was young was to lose a whole lot more weight and participate in a staged production of Home Alone and Chronicles of Narnia: The Lion, The Witch, and The Wardrobe playing Jeff McCallister and Edmund Pevensie respectively. That would have been one of the biggest successes in my life as a young budding actor and it would have been so much fun to have played a younger brother role rather than the real-life older brother that I am. Even when I came back to Cebu from my Christmas and New Year’s break in San Francisco, Santa Barbara, Los Angeles, and Washington D.C., I wrote that one of my New Year’s resolutions was to be thin like Jeff and Edmund because I aspired to look like that at that age. I did not want to be a massive fatty by any stretch of the imagination and the thought of ending up like that made my skin crawl with disgust and my hair stand on end with fright.

Nowadays, as an adult, I still aspire to be slim, though not slim as they were, but for a more different reason other than sheer vanity. At least going back to why I wanted to be thinner and aspire to have slimline frames like Jeff and Edmund had made me realize that I was just an idealistic thirteen-year-old boy with a lot of big dreams, huge aspirations, and no time for setbacks or disappointments. These days, wanting to aim for slimness is no longer a question of vanity or getting the next modeling deal once the pandemic subsides but a question of long-term self-sufficiency, good health, active energy, and the love I have for this short yet insane life of mine.

In conclusion, it has been fifteen years since I wanted to become as thin as Edmund and Jeff, especially when I flashed back to the time I was a thirteen-year-old seventh-grader attending a missionary-run school with a whole lot that I wanted to live for. Nevertheless, those memories that I had still hold fresh in my mind to this day because of how impressionable I was at that age. These days with more mature eyes, I can always fall back on health, happiness, and independence as reasons for me to keep on losing weight and live the skinny life I have always wanted to live.

I hope you all enjoyed this and I hope what I had to say was not overly triggering. Until then, I will see you in the next submission. Take care, stay safe, and stay healthy, everybody.

Edmund Pevensie from The Chronicles of Narnia: The Lion, The Witch, and The Wardrobe belongs to C.S. Lewis, Walden Media, and Disney. 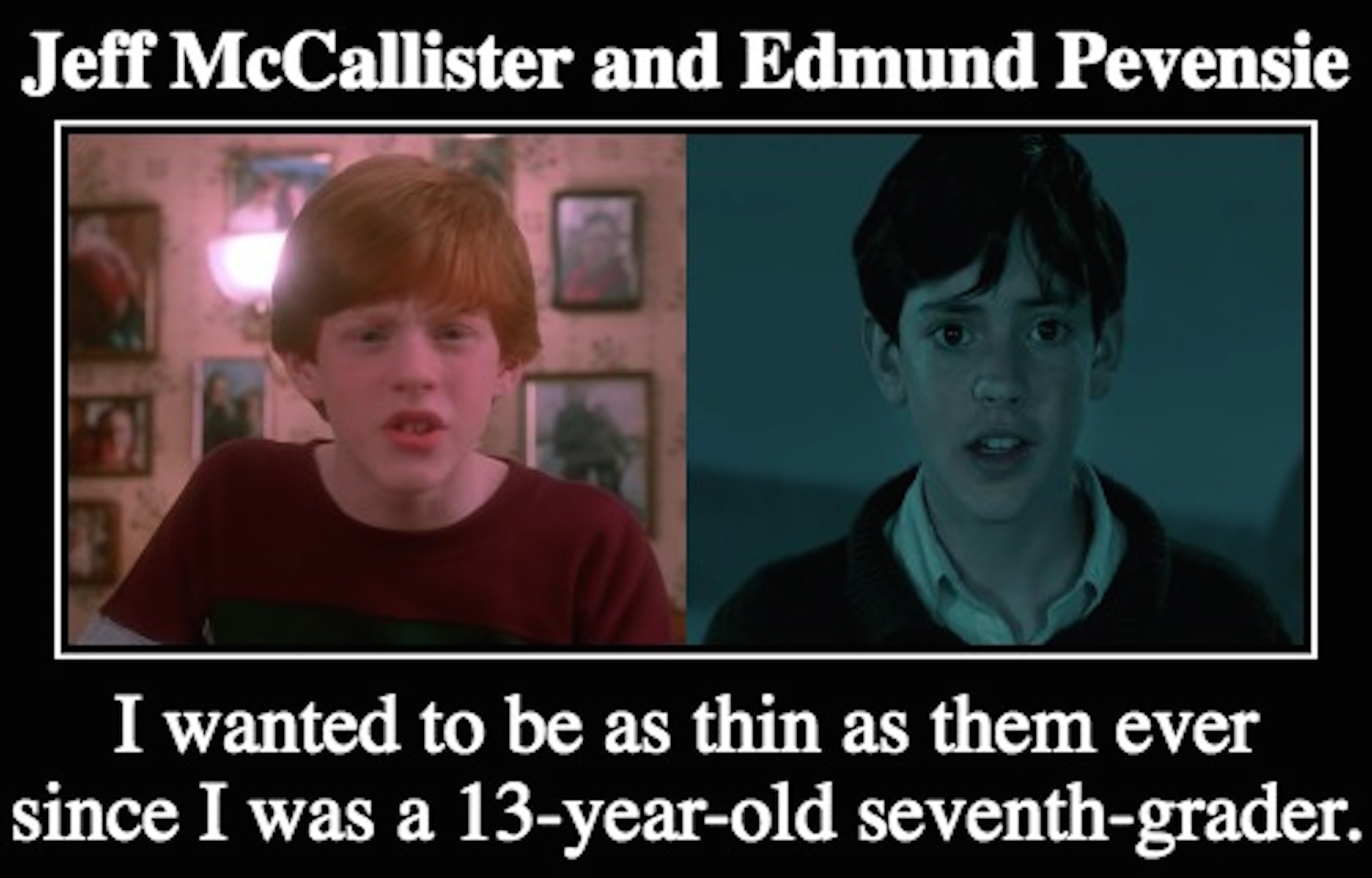