Well, random Family Guy quote from the episode Lethal Weapons aside, looks like Brick and Butch are not the only ones to have such a mighty moment. Now, Boomer, Blossom, Buttercup, and Bubbles are here and growling like leopards, jaguars, and panthers to show why they should never be messed with. The answer is pretty obvious, they can open up a can of kickass before you know it. Furthermore, I just love it when Boomer teams up with his most favorite people in the whole world, his darling sisters-in-law, Blossom and Buttercup, and his beloved, lawfully-wedded wife, Bubbles. I can certainly smell the amazing camaraderie and chemistry all four of these superhumans have with each other. Even more so, when Brick and Butch are added, but that’s another story. Much like the previous work I did with Brick and Butch, Boomer is 25 years old, Blossom and Buttercup are 24 years old, and Bubbles is 23 years old.
I decided to bulk Boomer up because I not only see him as a jovial yet misunderstood soul but also someone who is also reliable in terms of muscle. I bet you remember that scene in the episode “The Boys are Back in Town”, where the enlarged Boomer tore off a piece of construction work and bent it to make a hockey puck while making a cute and goofy face. Now that he’s all grown up, I envision him to be a much stronger individual, both physically and psychologically, actually grow a pair to stand up to his big bros, and even start a beautiful friendship with Blossom and Buttercup plus an equally beautiful relationship with Bubbles. Heck, he can even take both of his big bros down all thanks to the Mixed Martial Arts, wrestling, Muay Thai, kickboxing, jujitsu, and all the other martial arts they have down, as well as being in peak physical condition. In addition to that, I did make grown-up Boomer look like Ken Masters from the Street Fighter franchise, which I think makes him look all the more adorable.
I can see Boomer’s relationship with Blossom as a combination of endearing, sweet, plausible, and genuine. Being the diplomat that she is, she would definitely break down his walls and reveal a nicer, kinder side to him. She would even be super supportive of Boomer going out on dates with Bubbles. Moreover, she would even tell him to stand up to his brothers and not even think about pushing him around anymore. Boomer would even tell Blossom to not take everything too seriously and just chill, as he does joke about her worry lines on her forehead in a charming way.
With Buttercup, it’s the case of the gentle giant and the fiery, feisty tomboy. I see their relationship as playful, adorable, and funny. She would be the type of girl who would punch his powerful arms in a fun-loving and mischievous manner and he would be the type of guy who would give her noogies galore. On the long run, they would definitely enjoy each others’ company as sparring partners and there would even be times where Boomer would give Buttercup a massive bearhug with her gasping for air because of how super strong he is. Plus, Buttercup would be the one to further implement on how Boomer should stand up to his brothers and not always care what they think. Boomer would even tell Buttercup how cool she is to have around and would even shed her hardass, defensive and see that she can be a softie. Furthermore, she would also keep a vigilant eye on Boomer to ensure that Bubbles does not get hurt, lest he should he suffer a beating through her hands.
Finally, I will say this once and I will say this again. I am a devout Boomubbles fan because their pairing is not only sweet but it’s actually the most plausible out of the color-coded and overall RRBxPPG pairings, in my opinion. They would be the pair who start letting go of their prejudices and finally see the light and become great friends as children, then hang out more when they reach tweenhood to teenhood, date in their teens, and be the first of their siblings to marry and start a family. I firmly believe that their relationship will end up as the healthiest and will be loving and supportive parents to their darling children.
So, I hope you all enjoy this piece of fanart I did as well as this post. Until then, I wish you all a most pleasant day.
Boomer, Blossom, Buttercup, and Bubbles from The Powerpuff Girls belong to Craig McCracken. 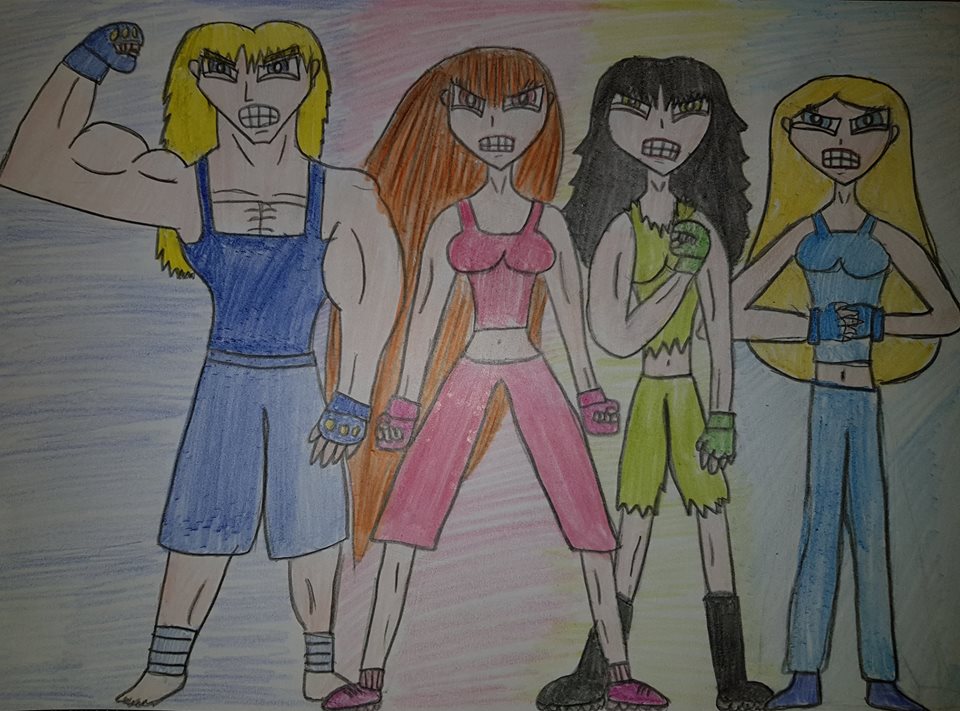